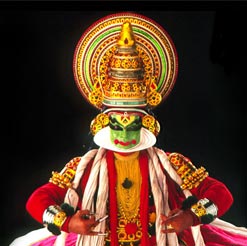 Cochin : Once a much prized pawn between the Portuguese, Dutch and English, Kochi or Cochin in the Southern Indian state of Kerala has a history of being a premier port along the fabled "spice route" to the east. Fort Cochin was a great emporium of trade, a harbor filled with ships, streets crowded with merchants and warehouses stored with goods from every port of Asia and Europe. Beginning with the Chinese and Arabs in the 13th century, the Portuguese arrived in 1500 A.D. followed by the domination of the Dutch and British. A large number of trading communities exist with 14 different languages spoken at a time.

Arrive and check into hotel. Afternoon free for leisure.Munnar; is a beautiful hill station on the western Ghats at about 1600 meters above the sea level. The town is situated at the confluence of the three mountain streams Mudrapuzha, Nallathanni and Kundala.There are lakes, reservoirs, forests and several tea eatates.

After breakfast drive to Thekkady(3hrs). Arrive and check into hotel. Evening boating at Lake Periyar.

Thekkady : is situated on the Western Ghats in Kerala; This spectacular and scenic drive takes you through gentle hills which are punctuated with vast expanses of tea , rubber and coffee plantations, meandering upwards to the aromatic forests where spice grows in abundance. The park has a picturesque lake in the heart of the sanctuary where herds of elephants and sambar, gaur and wild pigs can be spotted. Periyar also harbors the leopard, wild dog, barking deer and a variety of birds such as the darter, cormorant, grey heron and ibis. An early boat ride on the lake gives visitors an opportunity to experience the wildlife of this region.

Morning proceed to Kumarakom(5 hrs) Arrive and check into hotel. Rest of the day is free for Yoga/Ayurvedic Massage/bird Sanctuary visit etc.

Kumarakom : is a sleepy agricultural and fishing township blessed with a sanctuary for birds. Almost surrounded by the Vembanad Lake, Kumarakom is formed by the 40 odd rivers that flow down into the Arabian Sea from the cardamom hills in the west. The network of rivers, canals, and estuaries make it a beautiful expanse of verdant coconut groves and rice paddies. In Malayalam, the language of Kerala, this backwater region is known as "Kuttanad" or the land of short people.

After breakfast drive to Cochin (2 1/2 hrs) Airport / Railway station for your departure transfer.